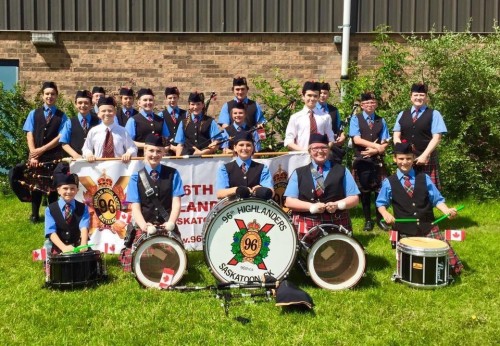 Join us at 12:15 pm for the parade!  The parade will begin in Butler Byers Century Hall and end at the Boomtown main stage for the Opening Ceremonies.

The 96th Highlanders Pipes and Drums youth band is a non-profit organization whose objective is to preserve and promote appreciation of Scottish heritage through highland piping and drumming.

The band plays at Remembrance Day services, Folkfest, Robbie Burns day events, benefits and sporting events, walks for causes, local and regional parades and several other venues.  Highlights of past performances include a trip to Scotland where the band competed in games at Perth, North Berwick, and the World Pipe Band Championships in Glasgow.

The band takes its name from the 96th Canadian Infantry Battalion of Saskatoon, Saskatchewan that was formed in 1915. The battalion consisted of 768 soldiers known as the “Canadian Highlanders” who fought in World War I. Their pipe band consisted of twelve pipers and six drummers. The battalion formally presented their cap badge to the band in 1966.  Today the band is administered by an association made up of the band members’ parents and operates under a constitution and by-laws.